Even before World War I a number of Polish Catholics had immigrated to Lansing. Monsignor John O’Rafferty, pastor of St. Mary, requested an assistant who could speak Polish. Rev. Leo P. Srybowicz was assigned to St. Mary parish in July 1916. He preached his first Polish sermon to those who gathered for Mass in the St. Mary Parish Hall on Walnut Street. Regular Sunday Masses began in January 1919. Bishop Michael J. Gallagher of Detroit formally established the Polish Catholic Community as a mission in October 1920. Adjacent lots on Barnes and Sparrow Streets had already been purchased. Groundbreaking for a basement church and a rectory was held in October 1921. The St. Casimir community achieved parochial status in September 1921. 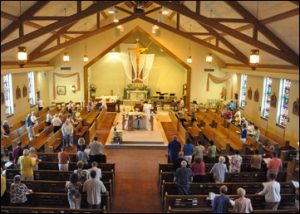 The growth of the parish led, in 1926, to the building of a two-story addition to the basement church. The second floor was for a school and the third floor was for a parish hall. A convent was constructed in the summer of 1928. The school opened that fall and was staffed by the Sisters of the Holy Family of Nazareth from Pittsburgh, Pennsylvania. The school closed in 1971 but the Holy Family Sisters continued to minister in the parish until 1983.

The present church was built during the pastorate (1946-1957) of Rev. Leo J. Kalinowski. The old church was converted into classrooms. The new school and gymnasium were built while Monsignor Michael J. Mleko was the pastor from 1957-1971. At the end of his pastorate the parish school was combined with that of Immaculate Heart of Mary. The new rectory and administration building was erected in 1980 when Rev. Albert C. Hornberger was pastor. In 1977, to celebrate the patronal feast, the first polka Mass was held. In the fall of 1985 St. Casimir School was reopened as the middle school under the I.H.M. principal.

During the decade (1987-1997) that Rev. Raymond Rademacher led the parish, a new ambry and baptismal font were installed. Also, the parish celebrated its 75th anniversary with a Mass celebrated by Bishop Carl F. Mengeling on September 27, 1996.

Rev. William R. Lugger has served as the pastor since June 1997, retiring September 1, 2019 having enriched the liturgies with his inspirational homilies and beautiful singing.

St. Casimir was born October 5, 1458, the son of Casimir IV, King of Poland. He was the third of thirteen children of King Casimir, who was of the Lithuanian house of Jagiello, and his wife Elizabeth, daughter of Emperor Albert II of Austria. Their palace at Crakow was the seat if government for Poland and Lithuania. 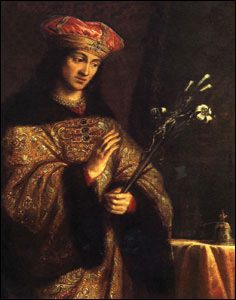 As a youth, he profited from teaching of historian, John Dlugosz, a person of extraordinary learning and great piety. Casimir’s brother John became King of Bohemia. Young Casimir was especially caring for the poor and used his resources and some of his brother John’s to help the poor. Casimir studied well, prayed often, and practiced self-denial. His clothes were plain, and under them he wore a hairshirt. Living in the presence of God, he was always serene and cheerful, and pleasant to all. He is known as the patron saint of students and was called the peace-maker for his aversion to oppression and self-indulgence.

In 1471, the people of Hungary, dissatisfied with their King, Matthias Corvinus, asked Casimir IV to place young Casimir upon the throne of Hungary. Casimir (not yet fifteen years of age) at first did not want anything to do with that, but in obedience to his father, he went with an army to secure his Kingship. From the beginning, young Casimir was convinced that the mission was unjust and militarily and diplomatically infeasible. Casimir’s own soldiers were deserting in large numbers because they could not get the pay and finally all abandoned him. Casimir decided on the advice of his army officers to return home to Crakow. His father, Casimir IV, was incensed that his son had failed to obtain the Kingship of Hungary and practically exiled him to the castle of Dobzki. Dutiful young Casimir remained at the castle for three months.

Casimir resumed his studies and meditation. After some time he was promoted to Vicerory in the absence of his fther, King Casimir IV, and ran the country with justice and clemency. He refused all inducements to marry a daughter of the Holy Roman Emperor Frederick III.

Suffering from a lung disease, Casimir’s health declined and he died at the age of 25 in 1484 at the castle of Grodno, Lithuania. He was buried at the Vilna Cathedral, the Church of St. Stanislaus. His remains have since been removed to a church in the suburbs and the cathedral converted to a museum. St. Casimir was canonized in 1521.

Casimir had great devotion to the Blessed Mother. Part of his daily prayers was his favorite hymn OMNI DIE DIC MARIAE, composed by St. Bernard of Cluny years before. We know the words of this great hymn as DAILY, DAILY SING TO MARY. A copy of hymn was buried with him. (Today, the parishioners of St. Casimir Church sing SERDECZNA MATKO, STAINLESS THE VIRGIN, to commemorate our Polish heritage.)